Samsung wanted to engage Millennial women and raise awareness of their phones.

Millennial women notoriously love entertainment, spending more time on Netflix than on any other platform, including Facebook, and they are always after something new to watch and talk about with their friends.

Samsung partnered with Netflix, one of the most loved brands amongst millennials, to bring Australian users exclusive access to the 'Tidelands' series, the first Australian Netflix Original. Using compelling underwater creative themes of Tidelands to create an engaging promotional campaign which rewarded Samsung users and drove brand interest among non-customers.

A fully immersive, mobile-first, augmented reality experience created a stunning submerged world for users to 'dive in' while joining a treasure hunt.

Australians engaged with the Tidelands Facebook Messenger chat bot on their mobile device, where they could trigger the Messenger camera to be placed in the AR underwater scene. From there, they could search the world for broken pottery pieces used to reconstruct a mysterious vase for the chance to win Samsung and Netflix prizes every day. 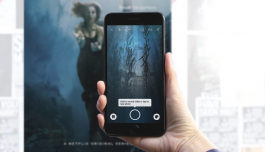